Remember birthday parties? Assorted color balloons, a simple sheet cake, streamers and pin the tail on the donkey. Those were the days.

Today, birthday parties have become yet another opportunity to keep up with the Joneses and one-up each other with Pinterest-perfect images for your Instagram feed. Enormous balloon centerpieces, mobile laser tag, character impersonators, princess spa days, video game arcades on wheels—yeah, it’s safe to say things have gotten out of hand.

And when you’re trying to throw a birthday party on a budget, it’s easy to feel like there’s no way to make it happen without either going overboard (don’t do that) or having the world’s lamest shindig. But have no fear—we’ve got 10 tips to help you throw an affordable celebration without sacrificing any of the fun!

There’s no unwritten rule saying you have to invite your kid’s entire class, soccer team roster and park playground buddies to their birthday party. It’s a nice thought, but it’s not realistic.

Try to limit your guest list to under 10 kids. Don’t forget, you’ll probably have parents sticking around too, and that can impact your food and cake budget.

If your child only wants to invite one or two friends, maybe it’s worth splurging on bowling, the zoo or a play center. If you’re only footing the bill for your own kid and a plus one, doing a birthday activity out and about will be easier to swing and may be even cheaper too!

“We offer a party but no presents from us, or they can pick one or two friends to go to the movies, museum with us.” — Mackenzie F.

2. Make your own invitations.

We live in a digital world, so take advantage of it! Your kid’s fifth birthday isn’t their wedding day, so don’t fork over $200 for printed, glossy invitations. Instead, make your own digital invites online and send them out via email or text.

3. Use free printables to decorate.

Good news, people: Pinterest exists! You no longer have to go to the local party store to stock up on decorations. There are plenty of free printables up for grabs online. Yeah, that’s right—free. You can’t beat that! All you have to do is set aside some time to search around the web, find what you need, and print them out.

But word to the wise: Don’t get suckered into the vortex of Pinterest party pictures to the point that you start comparing your own party to someone else’s. Sure, you can get some great birthday party ideas and inspiration on there, but remember, you’re planning a birthday party on a budget—your budget. Don‘t let Pinterest dictate what that budget should be.

4. Pick a theme you already have decorations for.

Half the fun of throwing a birthday party is picking out a theme and watching it play out. But remember, just because your child wants a superhero theme doesn’t mean you have to buy all the official gear at the specialty stores.

Here’s a cheap birthday pro tip: Try to pick (or encourage your kiddo to pick) a birthday party theme that uses things you already have. If your kid’s favorite superhero is Batman, then you probably have plenty of things already on hand to use as decorations. So, shop your house before you leave your front door to head to the store.

“We have four children, so I plan ahead on themes and massively coupon. If one wants a princess party, I buy the Valentine leftovers at 90% off and make tutus for everyone.” — Jessie H.

5. Have the party at your house.

Call us crazy, but there’s nothing wrong with throwing a birthday party in your living room, dining room or somewhere that doesn’t require you to pay for it. Seriously. If you want to have a birthday party on a budget, that’s how you roll.  Why shell out $300 to rent a trampoline park (plus the deposit) when you can just throw a party in your own backyard or at a park?

If your party starts at 5 p.m., be prepared to feed people. The same goes for lunchtime. If you invite people over at the time they’re used to eating, then they’re going to expect food. But don’t fret. You can cover this by giving them finger foods (not a full meal) and picking an off time when no one expects to eat, like 10:30 a.m. or 2 p.m.

No matter what time of day you go with, do give your guests a few snacks to munch on. No one likes a party where there are no snacks. You’re on a budget here, but you’re not a monster. Plus, a room full of hangry kids is never a good idea.

7. Make or decorate your own cake.

If you’re a regular Martha Stewart, you might envision going all out and making your own cake from scratch and decorating it with layers of fondant—you go-getter, you! But if you’re not so culinary talented, feel free to grab the nearest box mix and icing at the grocery store.

We know—making your own cake at home can be a real pain in the neck. Is the box mix and premade icing cheap? Sure. But sometimes, the hassle of actually making the cake can deflate you of any birthday spirit. That’s what generic cakes from the grocery store are for.

But don’t freak out if your kid wants a themed cake. After all, who doesn’t want Batman swooping in or a Disney princess gliding across that fluffy, sugary buttercream frosting? Pick up a generic cake at the grocery store (they’re cheaper than custom cakes) and slap one of your kid’s favorite figures on the cake. Just remember to wash it first—no one wants to crunch on actual dirt when they’re eating the worms and dirt birthday cake.

8. Use the dollar store for party supplies.

Honestly, the dollar store could end up being your one-stop shop for almost everything you need to throw a birthday party on a budget. From utensils and tablecloths to party favors and gift bags, the dollar store has got you and your budget covered. Shop the store and see how many things you can cross off your list at just a buck a pop. 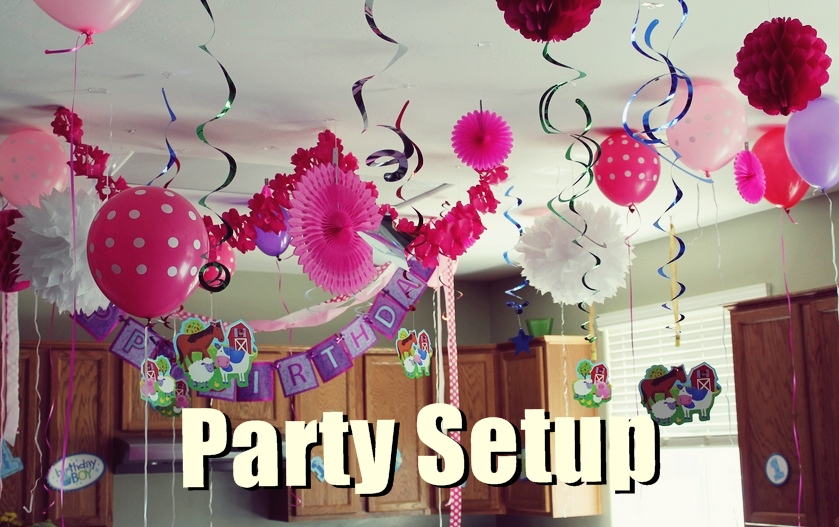 Get crafty! Go to your local craft store and pick up wooden figurines, photo frames or even custom letters for your guests to paint. It’s a cheap birthday party idea that will keep the kids busy for an hour, and they’ll all leave the party with a hand-painted item! Even better, you don’t have to worry about a party favor. Sounds like a win for everyone!

And don’t forget about the simple joy that classic birthday party ideas, like musical chairs, hot potato or silly string fights, can bring. Games like these have been good enough for birthday parties for generations, so why have we ditched them nowadays? Round up the party guests, let the games begin, and have a small prize on hand for the winners who reign supreme.

Before you shoot the messenger, let us explain. If your child is young enough that they don’t really know that full-fledged birthday parties are a thing, you might want to take advantage of that.

In other words, you don’t need to go all out on a 30-guest, smash-cake, “Baby in Onederland” shindig for your one-year-old. As your kiddo gets older, they’re going to come to expect a birthday party every year, so why burn yourself out before your sweetie can even talk?

That doesn’t mean you can’t celebrate, though! Take your little unsuspecting tyke to a petting zoo, park, dairy farm, ice cream parlor or somewhere you can have a fun outing without having to bust your birthday budget. That kind of thing might not be for everybody, but there’s no denying it’s a good idea if you want to pull off a birthday party on a budget.

“I was going to do a big party when my daughter turned one, and my husband asked me, “Is this party for her or you?” It brought me back down to earth, and we had a simple BBQ with family. It was perfect, because we could all enjoy with no pressure.” — Traci L.